In narrating a work of fiction, to a certain extent you are an actor who gets to play all the parts. That is a common observation by experienced audiobook narrators who have developed a style that allows the listener’s attention to drift away from the narrator and focus on the story itself as conveyed by the words of the characters in the work.

Of course with the fulfilling task of “playing all the parts” comes the challenge of distinguishing characters one from another, and offering credible performances that successfully depict a variety of character types, personalities, and genders.

I have written before about some of the techniques that work for me when trying to interpret various types of characters, but in some works, simple tricks of the trade like lightening the force of delivery for female characters while slightly raising the pitch, are not sufficient to address the situations depicted in the narrative.

I am currently producing a boxed set of four different books—classic westerns by the likes of Zane Grey—which were originally published more than 100 years ago. In one of the works in that collection, there are numerous characters, and a number of passages in which those characters engage in good-natured banter about the goings on that take place on a cattle ranch. In several such passages that take place in a bunkhouse, seven or more characters trade rapid-fire wisecracks about other characters and situations in the story. The characters have names like Shorty, Slim, Weary, Cal, Chip, Happy Jack, and Jack, and their lines are intermingled in a snappy repartee that reflects the quirks of each character’s personality.

The obvious challenge for the narrator is to represent each character’s persona succinctly and accurately while clearly differentiating the characters from one another as the dialogue unfolds.

In my previous outings narrating western fiction, characters have most often interacted in short scenes involving at most two or three characters at a time. And those characters appeared off and on throughout the book. It was not difficult to differentiate them when they had conversations.

A multifaceted dialogue, though, is considerably more challenging for a number of reasons. How do you establish a presence for the individual characters? How do you make it clear, using only your voice, who is speaking while keeping in mind that you are not performing a drama, but reading fiction from a book?

Here’s what I came up with to address this challenge.

First, I decided I had to read well ahead of where I was in my recording process to get as detailed sense of who these characters are as I could. Do they have any distinct physical characteristics? What are they wearing? Do they possess any special skills or abilities that might help me get to know them? In the bunkhouse scene, for example, the character called Slim was so named because he was quite the opposite of what the name implied; he was portly and short of stature. But he was also a good horseman, and highly respected as such by his fellow cowhands.

Once I got a sense of who the characters were, I had to decide what they sounded like, and how I could render their unique voices in my performance.

I did this by thinking of classic characters that I am familiar with. For example, I decided that the owner of the ranch should sound something like Ben Cartwright of the classic TV western, Bonanza. The protagonist and title character, Chip, would have a John Wayne quality because he was often engaged in taunting exchanges with the lead female character, Della, reminiscent of films featuring “The Duke” and Maureen O’Sullivan. If the voice of an actual person did not come to mind, I characterized a person as a “Granny, well-met,” or simply as “morose.”

I made a sheet of notes using a kind of shorthand to describe my assessment of the key traits and voice types I had decided on for each character. It is posted in front of the mic in my announce booth. 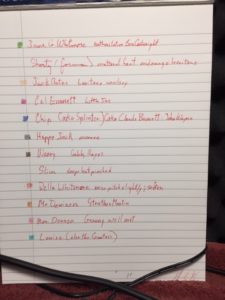 Characters are listed with brief notes on their quirks and personalities. They are assigned colors to link them to their lines in the manuscript.

On the sheet I also assigned a color to each character, and beside each character’s name, I drew in a small box using a colored pencil. So, for instance, next to the minor character, Mr. Denson, who sounds like Strother Martin (Cool Hand Luke), is an orange box, while James G. Whitmore, the ranch owner, gets a green box.

Next I went through a printout of the script and marked each character’s “lines” with the corresponding color for his or her character. This is helpful because passages often just begin with a line of dialogue and don’t identify the speaker until the end of a lengthy speech. So, when I see a passage underlined in blue, I know that the character is Chip, and I know to affect that voice. If Della speaks next, I can see that coming when I note the red colored lines beneath her words, and I switch to the modified Maureen O’Sullivan that I’ve chosen for her voice.

Next I had to rehearse. I read the script aloud until I felt comfortable that I had the voices down (I don’t do impressions, so my Ben Cartwright will never be confused with the real Lorne Green; the best I can manage is to “suggest” his intonations, pitch, and force when he created Ben’s character in the classic western series.)

When I’ve gone over the dialogue enough to acquire a good sense of who’s speaking and how they all sound together, I record. There is a lot of starting and stopping, but with skillful audio editing, the finished product sounds reasonably credible. I backstop my own opinion about this by asking (coercing?) my wife Candy to listen to the book, chapter by chapter. So far I’m meeting the “Candy Standard,” so I have reasonable confidence in the outcome of my process.

My background as the narrator with a resonant authoritative baritone is of little use in these heavy dialogue situations. That’s a hurdle to overcome, but it’s also rewarding to learn new skills and approaches and produce something fresh. The chapters in this book are relatively short, so I get a frequent sense of accomplishment as I finish one little melodrama at a time in the march toward a believable and, I hope, entertaining completed audiobook.