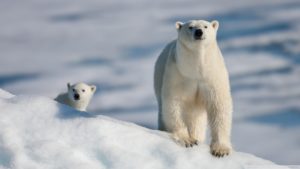 What you don’t know about polar bears is probably a lot. Well fear not, the authoritative source of polar bear lore is extant in the form of Ice Bear: The Cultural History of the Polar Bear, by Michael Englehard. I bet you didn’t even know there was a cultural history of the polar bear. After all, the compendium of works of art produced by the Rembrandts of the species is scant. I suppose there is beauty in any “songs” the creatures might have developed to serenade the dark polar nights as aurora borealis flickers about the frozen landscape.

No, rather than a natural history, which has been done frequently, Ice Bear is a comprehensive and detailed account of how the polar bear’s attributes have come to inspire and underlie a variety of values and attitudes among human kind. The focus is on human perceptions and experiences more than on the lives of the bears themselves.

Through thousands of years, the human fascination with the exotic and unknown has placed Ursinus maritimus in the role of being everything from a food source and producer of fur to an icon of superhuman attributes and a spiritual force.

Representative of the polar bear’s attraction to human emotion in modern times is a cuddly cub named Knut, born in the Berlin Zoo in 2006, who spawned enormous revenues from sales of stuffed replicas and other merchandise.  Knut made a fortune for the zoo during his brief life. Like some other rock stars, Knut’s life, was tragically cut short. At the age of four he drowned in his enclosure’s pool after suffering a seizure.

The book makes much of the abuse inflicted on these iconic animals by the succession of human impresarios who sought to gain financially from their existence. Not that polar bears were singled out for more ill-treatment than other hapless animals who have historically been captured and corralled for our amusement. Bear baiting, in which bears were tied up and subjected to attacks by dogs, and included more brown bears than polar bears, was a popular blood sport for many years. And history is replete with examples of horses, elephants, reptiles, big cats, and various primates whose hold on our collective imagination has frequently led to horrific treatment at the hands of their human handlers.

As audiobooks go, this one initially struck me as one that might be relatively easy to narrate effectively. I assumed it would be somewhat akin to a National Geographic Channel voiceover gig (not that I’ve ever done one) in which the narrator fades into the background as the uncomplicated story more or less tells itself in pictures. And to a certain extent, thus it was. But the part about being easy to narrate pretty much evaporated as I began to run across the many references to Norwegians and other Scandinavians who were prominent in the story of these bears. Names and place names like Halvmåneøya, aka Halfmoon Island, near Antarctica, were sprinkled liberally throughout the manuscript, necessitating a few on-the-fly lessons in Scandinavian diacritical markings and the resulting pronunciations and vocal rhythms that characterize the elocution necessary for credibility.

Another challenge for me as narrator was to attempt to convey in part the pictorial aspects of the bear’s character and history. The print book is richly illustrated with art work, drawings, and paintings.  Magnificent photographs depict the polar bear as it appears both in nature and in the human context that is the focus of this book.  Much of the impact of the book comes from viewing these illustrations as you read the text. Of course, there is no way to add that kind of impact to the audiobook. But I did attempt to adopt vocal patterns and intonations that suggest the aura of majesty exhibited by these magnificent ursine specimens. I don’t really know whether my efforts in this regard succeeded or not. But I do know that if I were motivated to experience a book so lovingly devoted to polar bears, I would opt for the print version every time.

And so this project has now been notched up to the status of another finished audiobook available for sale on Amazon and Audible (iTunes is also a source of audiobooks). It was an interesting book, and I know a lot about polar bears. I hope it allows listeners to get a feel for these beautiful animals as well.