Here you will find a listing of some of my published written work that includes several books and a selection of opinion pieces have been published in various media outlets.

This is a selection of textbooks that I have co-authored. Clicking on the image will take you to the Amazon site for the book.

Originally published in 1984, this college textbook is now in its tenth edition. It has been widely used in colleges and universities worldwide. The book has been translated into several foreign languages.

This college level textbook focuses on broadcast performance. In English versions and in translation, it is widely used in colleges and universities worldwide. In its fifth edition, it will soon be published in a completely revised and updated edition by Praeger.

This textbook focuses on radio broadcast station operations and management.

The beginning of the articles are posted here. To read more of any piece, click on the link.

Note: I wrote this essay when I received an invitation, sent to all alumni, to attend the inauguration of the newly appointed president of my alma mater, St. Lawrence University.

Forget the Inauguration. Just Show Up.

As with many other academic ceremonies, the staging of elaborate, multiday celebrations to mark the inauguration of newly hired college and university presidents probably goes back to the Middle Ages—gaudeamus igitur and all that. Whatever its origins, let’s not do it anymore. It’s distracting, expensive, and unnecessary. But more than that, it’s just silly. Read the entire essay.

Note: The Chronicle published this essay on the back page of the issue in which it appeared. I wrote it in frustration after noting that The New York Times had failed to run a photo that I had been assured would appear in a Sunday edition in 1998.

I was a high-school student lugging my tuba down the hallway, heading toward a rehearsal at a regional music festival. I was stopped by a man holding a camera, a gigantic model with a flash attachment, just like in the movies I’d seen in which an obnoxious newspaper photographer wearing a double-breasted suit and a fedora pops flashbulbs in the face of the beautiful, frazzled suspect in a murder trial. Something important was afoot. Read the entire essay.

This essay was written in response to news reports that a group of colleges known as the Overlap Group were required by The U.S. Department of Justice to stop the practice of establishing together the amount financial aid that would be offered to students who sought admission to two or more of the colleges in the group. 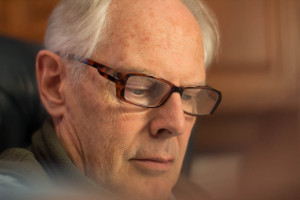 Now the Overlap Group Must Compete

The colleges and universities in the Overlap Group recently went through a normal admissions year. Members of this group of 23 prestigious colleges now are obliged by their agreement with the Justice Department to award financial aid the way in which everyone else does. Their financial-aid officials no longer are permitted to assemble to agree on how much aid they will offer to students who have applied to more than one of the institutions. Read the entire essay.

Note: This essay offers perspectives of me and my coauthor Carl Hausman from our perspectives as textbook authors on issues related to copyright that arise when professors produce course packets without securing permission of textbook publishers.

Honoring Copyrights Should Be Simple Decency

By Philip Benoit and Carl Hausman

As textbook authors, we are pleased by the New York District Court’s recent decision against Kinko’s Graphics Corporation, but we think it is important to clarify why we view the appropriation of our works without permission and payment of fees less as a question of economics and more as an issue of simple decency. Read the entire essay.

From The New York Times 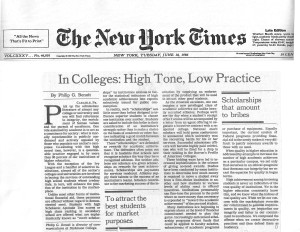 This is a thumbnail image of an op-ed piece that ran in The New York Times in 1986. The topic is merit scholarships. In trying to post this piece, I had to work with tools that I am only vaguely familiar with. For some reason, the essay cannot be found in the archives on the Times’s website. The letters that were later published reacting to the piece can be found in the archives, however.

If you wish to read the essay, you can click on this thumbnail to view a larger version of the image. I suspect there are ways to post to this website that might make access to a legible version of this easier, but at present I do not know what they are. In due course, I will post the reaction letters to the editor from the Times site.